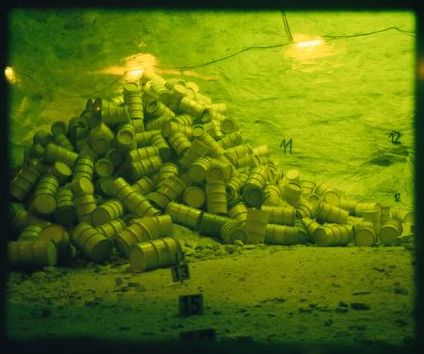 This is a review of the nuclear power advocacy of Prof. Barry Brook, a conservation biology / climate change scientist/academic at Adelaide Uni who runs the Brave New Climate (BNC) website. Prof. Brook has over 170 peer-reviewed publications to his name and expertise across a range of scientific disciplines and sub-disciplines.[1] His interest in energy debates stems from his interest in and concern about climate change. He isn’t in any way connected to − or in the pay of − the nuclear industry.

Here is a brief outline of how greenhouse emissions can be sharply reduced without recourse to nuclear power in Australia. One of the most practical Australian studies was produced by a group of scientists for the Clean Energy Future Group (CEFG).[2] It is practical in that it makes virtually no allowance for technical innovation, restricting itself to technologies that were commercially available in 2004. It factors in official projections of economic growth and population growth. It stands at the opposite end of the spectrum to studies which make heroic assumptions about technological developments and cost reductions, and those which assume heroic reductions in energy consumption through energy efficiency and conservation.

The CEFG proposes an electricity supply plan that would reduce greenhouse emissions from the electricity sector by 78% by 2040 compared to 2001 levels with small contributions (5−10%) from solar, hydro and coal and larger contributions (20−30%) from wind, bioenergy and gas (the research was done before concentrated solar thermal power (CST) with thermal storage became commercially available). Bioenergy and gas are used for co-generation of electricity and heat. Bioenergy comes primarily from crop wastes so it is not competing with alternative land uses.

The CEFG study can be thought of as a baseline or worst-case study because it makes no allowance for developments in important areas like solar-with-storage or geothermal power. University of NSW academic and former CSIRO scientist Mark Diesendorf, who contributed to the CEFG study, has proposed a more ambitious scenario (PDF) that replaces all coal and gas used in electricity generation with renewables. He and his colleagues at UNSW have performed computer simulations of 100% renewable electricity in the National Electricity Market, in which hourly demand is supplied reliably with mixes of CST, wind, solar PV, biofuelled gas turbines and existing hydro.

CSIRO scientist Dr John Wright has proposed a scenario in which renewables generate over three-quarters of Australia’s electricity by 2050: wind provides 19.4%; geothermal 19.0%; solar thermal 18.3%; solar PV 12.8%; bioenergy 5.1%; and ocean energy 0.7%. Dr Wright states: “Overall, increasing renewable energy technology will take out in the order of 200 million tons of CO2 by 2050 under this scenario. That is equal to about all of our major stationary energy CO2 emissions now. This is a major, major change.”

Siemens Ltd., a company with extensive involvement in the energy sector, has mapped out an energy plan for Australia in which the contribution of fossil fuels to electricity generation falls from 93% to around 10%, with the remainder generated by a mix of renewable technologies consisting mainly of solar (35%), wind (18%), and geothermal (17%). Large-scale energy storage is provided by a mix of solar thermal and hydrogen. In the Siemens plan, most large-scale transmission interconnectors are High Voltage Direct Current (HVDC), providing significant reduction in losses and thus allowing for efficient, long-distance transmission of renewable energy-generated electricity around the country. Siemens also proposes the development of HVDC links to South East Asia to export renewable electricity.

Australia’s energy problem is broader and more difficult than the electricity problem − and the global energy/climate problem is broader and more challenging than Australia’s problem. Suffice it here to note that there is a body of expert opinion more optimistic about the potential of renewables and energy efficiency (and more critical of nuclear power) than Prof. Brook’s expert opinion.

He doesn’t know much about the topic, for example claiming that North Korea never signed the Nuclear Non-Proliferation Treaty although Pyongyang’s accession to then withdrawal from the NPT is central to the story − a story which has been in the media constantly for the past two decades.

Prof. Brook claims to be concerned about nuclear weapons proliferation but the evidence suggests otherwise. For example, asked at a public forum what needs to be done to fix the flawed nuclear safeguards system and what role he sees for academics/scientists such as himself to help address the problem, Prof. Brook responded: “That’s a political and legal question and I have no further comment.”

Prof. Brook’s favourite argument to trivialise the proliferation problem is to claim that the weapons “genie is out of the bottle”. He argues that countries which already have the capacity to produce fissile (weapons) material account for a large majority of global greenhouse emissions (USA, China, Japan, Germany, France and others). That’s true, but it tells us little of significance. To get a handle on the proliferation risks of the nuclear ‘renaissance’, if it eventuates, here are some relevant figures:

(Some other WMD myths promoted by nuclear advocates are debunked here.)

As former US Vice President Al Gore has argued, a major (horizontal) expansion of nuclear power will “run the proliferation risk off the reasonability scale”. In addition to the extraordinary destructive potential of nuclear weapons, another concern is the potential for a nuclear exchange involving the detonation of 50−100 nuclear weapons (targeted at cities) to cause catastrophic climate change.

Prof. Brook claims that the (non-existent) ‘integral fast reactors’ he champions “cannot be used to generate weapons-grade material.” That claim is false. George Stanford, who worked on an IFR research program in the US, states: “If not properly safeguarded, they could do [with IFRs] what they could do with any other reactor – operate it on a special cycle to produce good quality weapons material.” Likewise IFR advocate Tom Blees notes that: “IFRs are certainly not the panacea that removes all threat of proliferation, and extracting plutonium from it would require the same sort of techniques as extracting it from spent fuel from light water reactors.” Depending on the design it might be difficult to use IFRs to produce fissile material for weapons or it might be simple − and some IFR advocates promote designs that would (inadvertently) be ideal for weapons production.

Prof. Brook acknowledges that his advocacy of ‘Generation IV’ fast reactors is sometimes a smokescreen for the promotion of conventional reactors: “Although it’s not made abundantly clear in the article, I’m actually increasingly of the view that Gen III+ reactors will have a major role to play in large-scale nuclear deployment over the next two to three decades, to support the ramp up of the Gen IV fleet … But making this point credibly in a short Op Ed like this would have left room for nothing else, and also would have risked been seen as ‘same old, same old’ by the nuclear power fence sitters (or those who are ‘weak antis’). Hence an emphasis on Gen IV, to try to hook the fresh fish.”

Prof. Brook states (5AA radio, 7 July 2009): “In terms of turning a nuclear fuel rod into a bomb, that’s impossible … if you took a spent fuel rod from a reactor all you could do with it would be to irradiate a few worms in the dust, there’s no way you can make a nuclear bomb out of it.” That claim is false, as is this: “plutonium that comes out of reactors … is contaminated with different isotopes of plutonium which means that even if you had all of the facilities available to you that the Manhattan bomb designers had, you still wouldn’t be able to use it to create a nuclear bomb.”

Prof. Brook states: “I’m not aware of any plutonium that has actually gone missing apart from the hyperbole of anti-nuclear groups claiming that it has.”

Prof. Brook states: “Prior to the Fukushima Daiichi accident, caused when a 14 metre tsunami crashed into a 40-year old power station in Japan, no member of the public had ever been killed by nuclear power in an OECD country.”

However the United Nations Scientific Committee on the Effects of Atomic Radiation (UNSCEAR) has estimated the collective effective dose to the world population over a 50-year period of operation of nuclear power reactors and associated nuclear facilities to be two million person-Sieverts (it does not provide OECD figures separately). Applying a standard risk estimate (0.05 fatal cancers per Sievert of exposure to low-dose radiation) gives an estimated 100,000 fatalities. The International Atomic Energy Agency (IAEA) gives a collective effective dose figure of 400,000 person-Sieverts for “nuclear power production”[3] − five times lower than the UNSCEAR estimate. Notwithstanding the considerable uncertainties with the dose and risk estimates, and whatever the OECD/non-OECD breakdown, Prof. Brook’s statement doesn’t hold up.

Prof. Brook states that the linear no-threshold theory of radiation exposure and cancer causation is “discredited” and has “no relevance to the real world”. However:

Prof. Brook states: “The credible literature (WHO, IAEA) puts the total Chernobyl death toll at less than 60. The ‘conspiracy theories’ drummed up against these authoritative organisations rings a disturbingly similar bell in my mind to the crank attacks on the IPCC, NASA and WMO in climate science.”

No study − by the World Health Organization, the IAEA or anyone else − estimates a Chernobyl death toll of less than 60. Indeed no study estimates a death toll of less than several thousand (although an UNSCEAR report, discussed below, declines to provide any estimate at all of the long-term cancer death toll). Prof. Brook is referring to studies by the UN Chernobyl Forum (PDF) and the World Health Organisation in 2005-06 which estimate up to 4,000 long-term cancer deaths among the higher-exposed Chernobyl populations and an additional 5,000 deaths among populations exposed to lower doses in Belarus, the Russian Federation and Ukraine. The Chernobyl Forum includes UN agencies such as the IAEA, UNSCEAR, and WHO.

A study published in the International Journal of Cancer in 2006 estimates 16,000 long-term cancer deaths from low-level radiation exposure from Chernobyl. Research published in 2006 by UK radiation scientists Ian Fairlie and David Sumner estimates 30,000 to 60,000 deaths. A 2006 scientific study commissioned by Greenpeace estimates a death toll of about 93,000.

Studies such as those listed above typically use a risk estimate derived from the linear no-threshold theory (LNT). There is uncertainty about the accuracy of the LNT-derived risk estimate in relation to low doses and low dose rates. However that does not mean − as many nuclear advocates state or imply − that the LNT-derived risk estimate overstates the true risk. It may be accurate or it may understate or overstate the true risk. Thus the BEIR report cited above states (p.6) that “combined analyses are compatible with a range of possibilities, from a reduction of risk at low doses to risks twice those upon which current radiation protection recommendations are based.” Epidemiologists / statisticians deal with the uncertainty by providing a range of estimates based on ‘confidence intervals’ − in simple terms, the wider the estimate, the greater the confidence.

Another report (PDF) by UNSCEAR argues that the long-term cancer death toll from Chernobyl cannot be meaningfully estimated because of “unacceptable uncertainties in the predictions”, i.e. the limitations of epidemiological studies, and the uncertainties of applying a risk estimate (e.g. based on the LNT theory) to the collective radiation dose estimate (e.g. the IAEA’s collective dose estimate of 600,000 person-Sieverts[4]).

That approach is of no use to anyone who wants an estimate of the Chernobyl death toll, however uncertain. It sits uneasily with UNSCEAR’s involvement in the Chernobyl Forum study which estimates a death toll of 4,000 among the higher-exposed populations. It sits uneasily with UNSCEAR’s view that “the current balance of available evidence tends to favour a non-threshold response for the mutational component of radiation-associated cancer induction at low doses and low dose rates.”Another problem is that many nuclear advocates (such as Prof. Brook’s colleague Ben Heard) repeatedly misrepresent UNSCEAR by conflating UNSCEAR’s unknown long-term cancer death toll with a long-term cancer death toll of zero − obviously they are two very different propositions.

Prof. Brook states that “nuclear power is the safest energy option”. Nuclear power safer than wind and solar? He could only arrive at that unlikely conclusion by using the nuclear industry’s ‘methodology’: